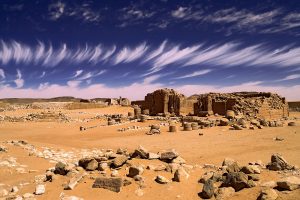 A main objective of the Sudan Archaeological Society Berlin e. V. (SAG e.V.) is to preserve the testimonies of the ancient cultures of the Middle Nile Valley in today’s Sudan. In the selection of supported projects, the focus is on the preservation of historical monuments; however, projects in the area of ​​rescue archeology were also promoted in the 2000s.

At the center of the SAG’s commitment was the site of Musawwarat es-Sufra, an extensive site of the Meroitic era (about 270 BC to 350 AD) in the semi-desert northeast of the 6th Nile Cataract. Since the founding of the SAG e.V., numerous projects have been supported there in the areas of securing and restoring ancient buildings as well as in the tourist development of the site. Since 2005, the SAG has also been involved in rescue excavations in Musawwarat. In addition, from 2005 to 2008 she also promoted the rescue archaeological campaigns of the Humboldt University Nubian Expedition (H.U.N.E.) on the 4th Nile Cataract.

The second overarching goal of the SAG is the information and education work. Here it is the concern to convey the wealth and importance of the cultural legacy of Sudan to a broad public. Served mainly by the annually published journal of the society ‚Der Antike Sudan. Mitteilungen der Sudanarchäologischen Gesellschaft zu Berlin e. V.‘ (MittSAG), the Fritz Hintze Lecture on Sudan Archaeology and the ‚Sudan Dag‘, which – financed by the SAG – are held once a year at the Humboldt University in Berlin.

In addition, special projects, such as exhibitions or popular publications, are conducted or supported by the Company itself.